Two months ago, Pope Francis welcomed Sheik Ahmed el-Tayeb, - the Grand Imam of Al-Azhar University in Cairo, and the highest scholarly authority in Sunni Islam - to the Vatican.

And a week ago, the Pope sent a representative to Al-Azhar as a follow-up and to "relaunch dialogue."

The original meeting, which included discussions between larger delegations from Al-Azhar and the Vatican, was characterized as extremely friendly - a sort of "re-set" of Catholic-Muslim relations after the iciness allegedly set off by Pope Benedict's Regensburg remarks in 2006.

According to Vatican spokesman Federico Lombardi, in their conversation


they had focused mainly on the theme of the common commitment of the authorities and faithful of the great religions for peace in the world, the rejection of violence and terrorism, the situation of Christians in the context of the conflicts and the tensions in the Middle East and their protection.

The Pope gave Sheik el-Tayeb a number of gifts including a copy of Laudato si.

Then they spontaneously embraced.

Sheik el-Tayeb is often described as a "moderate." He looks rational and reasonable, without the crazy smile of the fanatic. He supported el-Sisi against the Muslim brotherhood in Egypt and has made a number of public statements against violent extremism and in favor of human rights in general.

A few months before meeting the Pope he declared in front of the German Parliament that the Koran guaranteed religious freedom.

However, as the Cairo Institute for Human Rights Studies recently pointed out (as highlighted by Raymond Ibrahim in a recent essay), el-Tayeb has a history of saying one thing to Western audiences and another to Arabic or Muslim ones.

For example, during this past Ramadan, el-Tayeb reaffirmed on his television show that Islam mandates death for apostates:


Contemporary apostasy presents itself in the guise of crimes, assaults, and grand treason, so we deal with it now as a crime that must be opposed and punished…. Those learned in Islam [al-fuqaha] and the imams of the four schools of jurisprudence consider apostasy a crime and agree that the apostate must either renounce his apostasy or else be killed.

The plucky Institute made a public statement calling on him to renounce this position, also making the general observation that


Al Azhar adopts two contradictory speeches: one is open and directed externally, while the other supports violent extremism, and is directed internally.

Interestingly, it appears that the statement was not released in English or referenced on the English version of the site.

What are we to make of this?

Is Pope Francis aware that his new Muslim friend appears to believe that apostates from Islam should be killed? How does this comport with the "protection" of Christians in the region? Or perhaps the Pope, in his rejection of "proselytism," does not believe that Christian converts are worthy of protection, or should not be placed in the category of "Christians." Maybe it's more of an ethnic category.

Also, converts do tend to be a bit conservative, after all.

Actually, I suspect the Pope has no idea what el-Tayeb really believes or more to the point, doesn't really care. But he does seem to care very much about publicizing how dialogue with his quasi-peer distinguishes him from his predecessor: 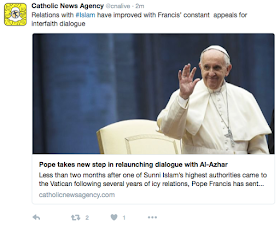 In fairness to el-Tayeb, as the highest Sunni Muslim scholarly authority in the world it would be difficult if not impossible for him to declare to a Muslim audience that apostates shouldn't be put to death, as this is clearly stated in the Koran, the Hadith and Islamic history and tradition. In that context, advocating the death penalty for apostates is not an unusual or extreme position at all. Indeed, polls show that most Muslims in Egypt support it. Though, again, there is a tradition of not, as it were, making a big deal of this to Western audiences.

It may even be that el-Tayeb himself doesn't himself particularly want to execute apostates.

So, why don't they just leave?

Who speaks for them?

Not Pope Francis, obviously.
Oakes Spalding at 11:13 AM
Share