Pope: “When they tell me that there is a Congregation that draws so many vocations, I must confess that I worry." 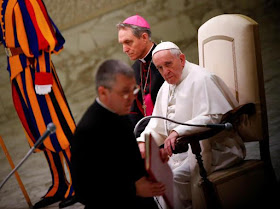 “When they tell me that there is a Congregation that draws so many vocations, I must confess that I worry."

That nasty little gem was one of a number of bizarre statements from a recent Q & A with Pope Francis, curated by Antonio "Sock-Puppet" Spadaro. It was published today in Corriere Della Sera and in turn referenced by Lifesite News.

I was going to say it was an "astounding" statement, but of course, coming from Pope Francis, it unfortunately wasn't. And to be fair, Francis is not the only one with such an attitude. Across the Catholic world, or at least across the European and American Catholic world, the only place where vocations are growing is within traditionalist orders and congregations. In turn, many if not most of those are now within the crosshairs of hostile bishops.

In Chicago, Cardinal Cupich is presiding over a program called Renew my Church - an extremely vague effort that, as far as anyone can tell, seems to be about the managed closure of parishes and schools, dressed up in fluffy language.

Many fear that Cupich would like nothing better than to use Renew my Church as a pretext to act against one of the most thriving parishes in the city and the relatively new religious order based there.

It's a traditionalist parish, and therefore Cupich views it as an enemy.

I've been attending St. John Cantius for eight years, and I've been publicly commenting on Catholic subjects for more than two of those. But I have to confess, the hatred that successful traditionalist churches inspire in much of the hierarchy is still somewhat of a mystery to me.  I mean, I do understand why they don't like us - we, at our best, represent everything that they are not - but the degree of near fury is at first glance surprising. I have it on pretty good lay authority that Cupich has an almost paranoid obsession with Cantius. Why?

When my wife was confirmed a few years ago, I saw her walk with a few other adults and a much larger crowd of eleven-year-olds to the altar rail for a confirmation practice run. On the way, the supervising priest gave them this cheery message: the world will hate you.

That wasn't merely his opinion, of course. Christ Himself said it. If you love Me, the world will hate you as it hated Me. Not be indifferent to you or annoyed by you or dislike you or whatever, but hate you.

And you might as well learn that at the beginning, even if you're only eleven. It's part of the deal.

Cupich, many other bishops and yes, the current Pope are much more of this world than their titles suggest. Indeed, by now, some of them are almost exclusively of this world. But they still have a sense of what they were or what they should have been. That newly confirmed eleven-year-old girl now has what they will perhaps never have. This gnaws at them. Sometimes that gnawing grows into hatred.

I have no reason not to take the Pope's words at face value: "I worry."