As some of you know, I am a parishioner at St. John Cantius. I was confirmed there nine years ago. Julie and I were subsequently married there, and she, in turn, entered the Church soon after. Our four children were baptized there. I'm going to use most of this post to try to relate only the facts as I know and can remember them, partly from the various conversations and discussions I've had with parishioners and others over the last 24 hours. A few of my own personal opinions will be made clear at the end of the post.


Let us beset the just one, because he is obnoxious to us; he sets himself against our doings, reproaches us for our transgressions of the law and charges us with violations of our training. He professes to have knowledge of God and styles himself a child of the Lord. To us he is the censure of our thoughts; merely to see him is a hardship for us, because his life is not like that of others, and different are his ways.... Wis. 2:1, 12-22.

- From the last public reading by Father Frank Phillips, at Mass on Friday morning.

This weekend, in a letter read out during 5:00 Mass on Saturday and repeated during the 7:30, 9:00, 11:00 and 12:30 Masses on Sunday, the Archdiocese of Chicago announced that Fr. Frank Phillips had been removed as Pastor of St. John Cantius and as Superior of the Order that he founded, the Canons Regular of St. John Cantius.

The letter stated that Fr. Phillips had been credibly accused of improper relationships with an adult male or males.

Representatives of the Archdiocese subsequently added more to the story in unofficial talks after Mass: The allegations involve three adult males, they refer to relatively recent actions (in the last five years), and the complaints do not involve any criminal or civil charges. They first came to light in November. Someone suggested (perhaps one of the representatives) that the investigation was expected to take six months.

The Archbishop appointed Rev. Scott Thelander, a member of the Canons Regular who had recently been Pastor at St. Frances Cabrini Church in Springfield, to become "Interim Administrator" of the Parish and, I assume, the Order. Fr. Trenton Rauck of St. John Cantius will replace him in Springfield.

On Saturday, St. John Cantius posted this letter on its website, and subsequently read it out after the letter from the Archdiocese at each of the four Masses on Sunday. 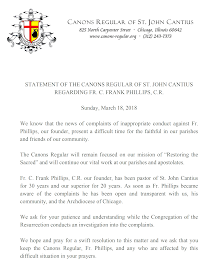 The letter has since been taken down, it is unclear why or on whose direction, and replaced by this short note:

At Mass yesterday and today, there was great shock and grief. One of the younger priests was seen to be crying.

Everyone is solidly supportive of Fr. Phillips. There is a huge amount of love and affection for him here, both on a personal level and for everything he has done to build up the parish from near-death to being one of the country's leading centers for Catholic Tradition and the Traditional Latin Mass, as well as becoming a Chicago cultural landmark in its own right. As far as I know, there has never been even an atom of rumor here of inappropriate conduct or homosexuality.

(I just reread the above paragraph, and it doesn't put it quite right. If you are not a parishioner at Cantius, it would be perhaps difficult to understand the level of love and respect we all have for Fr. Phillips. For a man always so busy with so many tasks, it's remarkable how many people feel so close to him.)

There was also much anger, directed, as might be expected, at Cardinal Cupich, who has long been perceived as hostile to this Traditionalist parish. At the Saturday evening Mass, a man loudly departed his pew and stormed into the vestibule, leaving the heavy doors swinging behind him. At the Sunday 7:30 Mass, a woman interrupted the reading of the first letter, shouting that the whole thing was a setup.

On the other hand, in their personal conduct after Mass towards the representatives from the Archdiocese, most parishioners were polite, at least in the interactions that I witnessed. And on the St. John Cantius Facebook page (administered by a layperson) and in other social media, the call has gone out for restraint. So, among other things, threads or comments that might be construed, even remotely, as being critical of or hostile to Cardinal Cupich or the Archdiocese have been taken down or deleted. And so on.

After the 11:00 and 12:30 Masses, I asked the representatives why Fr. Phillips had been "removed" as opposed to "suspended," especially considering that only complaints had been officially acknowledged and the investigation by the Resurrectionists had not yet begun. As I remember it, I received two different answers from the first spokesman and a third answer from the second spokesman:

While a recent or active "inappropriate relationship" with a parishioner or parishioners would certainly be a serious matter and potential grounds for removal, classifying, pre-investigation, a complaint or even set of complaints not involving minors and not involving a breach of criminal or civil law as very grave, strikes one as a bit odd. And removal at this stage is not standard procedure, either as presented in the Archdiocese Handbook on Personnel or considered against the background of other recent cases in Chicago.

As far as I know, and according to the Handbook as I read it, even a priest accused of criminal molestation of a child is generally placed on administrative leave, at least pending the results of an investigation.

I have to say that, to me, the overall tone of the official statements as well as the unofficial talk, is that whatever the results of the investigation, Fr. Phillips will not be coming back.

While the precise nature of the charges is still unclear, it's fair to say that most parishioners have a difficult time believing that Fr. Phillips could be anything but innocent. Even on the logical possibility that there might be at least partial truth to the charges (and I suspect the hardheaded among us have considered the possibility), and whatever might or might not be said in public, many are viewing this as Cupich's long-anticipated attempt to assert control over the Canons Regular and St. John Cantius itself with the eventual goal of shutting us down.

The Canons still have no official independent status and all members could be reassigned by the Archdiocese at any time, or the Canons Regular broken up or dissolved.

Whatever Cupich's actual desires or intentions, I always believed we would be protected by the fact that an obvious move against Cantius would be perceived badly by the Chicago community - again, partly keeping in mind our status as a cultural institution. Forgive me, but I never thought it would happen this way. Now it seems like it was the most (or the only) logical way for it to happen.

A round the clock Rosary Chain for Fr. Phillips is being organized at:

In addition, I believe a public prayer is being organized outside of Holy Name Cathedral. I'll post an update when I have the details.