Jason deCaires Taylor is a British "eco-artist" who is famous for creating underwater sculptures, most recently on a large scale - installations that have been dubbed "underwater museums" or "sculpture parks."

Here is an excerpt from the Biography on his website:


A prolific sculptor, he became the first of a new generation of artists to shift the concepts of the Land art movement into the realm of the marine environment. He gained international notoriety in 2006 with the creation of the world’s first underwater sculpture park, situated off the west coast of Grenada in the West Indies. Now listed as one of the Top 25 Wonders of the World by National Geographic the park was instrumental in the government declaring the site a National Marine Protected Area. This was followed in 2009 when he co-founded MUSA (Museo Subacuático de Arte), a vast collection of over 500 of his sculptural works, installed between Cancun and Isla Mujeres in Mexico.

Other major projects include Museo Atlantico (2016), a collection over 300 submerged sculptures and architectural forms in Lanzarote, Spain, the first of its kind in European waters. The Rising Tide (2016 Thames London) and Ocean Atlas a monumental 60-ton single sculpture located in the Bahamas.

The works are constructed using pH neutral materials to instigate natural growth and the subsequent changes intended to explore the aesthetics of decay, rebirth and metamorphosis. His pioneering public art projects are not only examples of successful marine conservation, but works of art that seek to encourage environmental awareness, instigate social change and lead us to appreciate the breathtaking natural beauty of the underwater world. 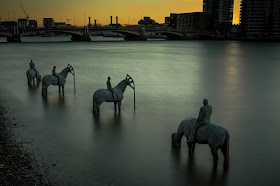 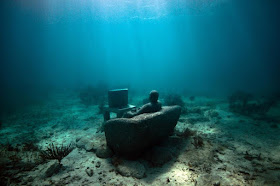 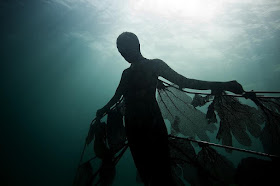 As part of the installation in Lanzarote, Spain, he designed “The Raft of Lampedusa,” which, according to PBS News Hour,


shows a group of people huddled in a raft in an homage to French Romantic painter Théodore Géricault’s painting “The Raft of the Medusa.” The piece references Europe’s current refugee crisis, according to a statement on the project.

“The work is not intended as a tribute or memorial to the many lives lost but as a stark reminder of the collective responsibility of our now global community,” Taylor wrote

As far as I know, of the many artistic tributes to "migrants," this is the only one built underwater - 50 feet underwater, to be exact. 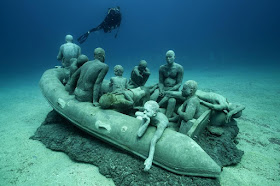 One of the ironies of Taylor's work is that for all of his sympathy for marginalized global communities, etc., his sculptures are generally only accessible to wealthy Western tourists who can afford expensive scuba gear or who have the means to stay in pricey beach resorts.

Obviously, I disagree with much of the artist's politics as well as the New Age silliness of his philosophy.

But all of that said, I also happen to think many of his works are quite interesting.

Or, rather, some of them are dumb, some are ugly, some are silly, a few are beautiful, but many are just, well, fun.

I highly recommend looking at his website and checking out the photographs of his diverse creations. As I understand it, most of the shots were taken by Taylor himself who is also a skilled underwater photographer.

One of his most recent works was unveiled in July. It is (or was) the partially submerged box-shaped Coralarium at the Fairmont Hotel Sirru Fen Fushi on the Maldives Islands.

Guests at the resort could swim to the installation and explore it's exposed or underwater parts, the proportion varying according to the tides. Human figures in various poses populated the interior and roof. 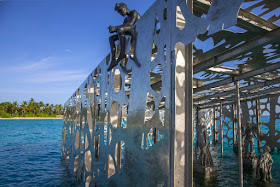 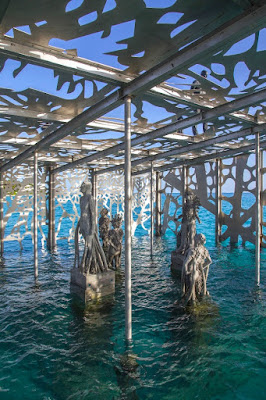 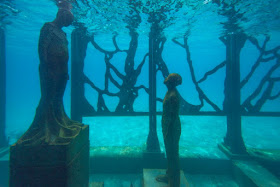 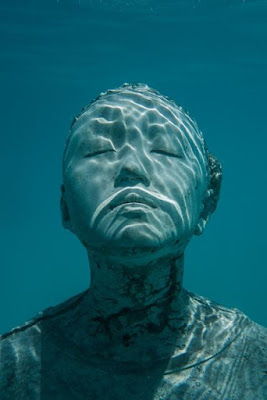 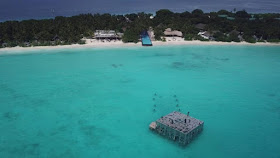 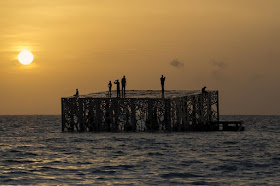 Here is one enthusiastic recent review on Trip Advisor:

And here is part of the blurb: 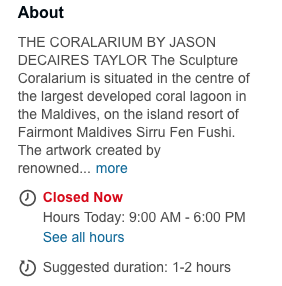 It turns out that the Coralarium fell afoul of Muslim religious opinion:

Last week, Maldives police boated across to the installation and destroyed it with pickaxes and sledgehammers.

Their little escapade was chronicled by the British tabloid The Sun: 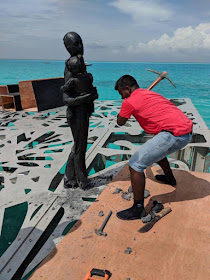 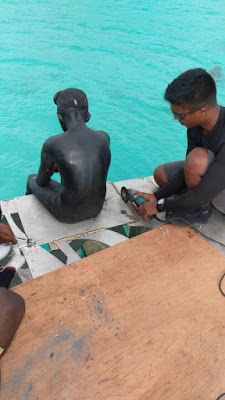 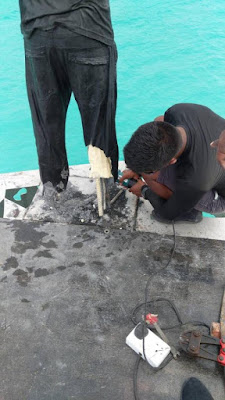 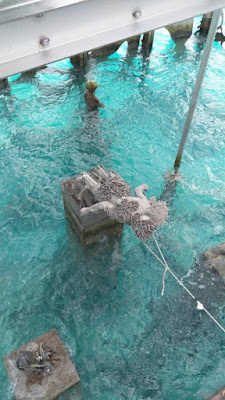 Yes, they literally dragged one statue off by her hair.

Why did they destroy it? There had been no underwater statue of Muhammed, nor, as far as I can tell, were there any completely naked women, etc. Rather, it appears that the work violated the general Muslim rule against artistic depictions of people. The various three-dimensional figures were "idols," according to outgoing Maldives president Abdulla Yameen.

I do not know whether the cage-like superstructure itself was or will be spared. But I hope they leave the stripped down version - with its fun and joy removed - as a monument. 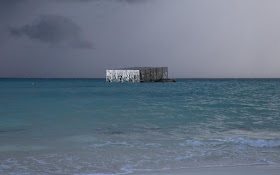