They have much in common.

All have solid resumes in parish, missionary and organizational work. Bishop Hicks is currently and will remain Vicar General of the Chicago archdiocese.

All are fluent in Spanish and have worked with Hispanic parishes and Hispanic Catholic organizations in the Chicago area.

They all appear to be firmly aligned with the "social justice" wing of the Catholic priesthood, especially and unsurprisingly as it relates to Central America and Hispanic issues in general.

But, most notably, all graduated from St. Mary of the Lake (known simply as "Mundelein") in the same year, 1994.

Yes, this was at the height of the period where Mundelein was regarded as one of the most prominent "gay" seminaries in the country.

It was nicknamed "The Pink Palace."

In Goodbye, Good Men, journalist Michael Rose uses numerous eyewitness accounts to paint a picture of the heavily charged homosexual atmosphere at Mundelein during the 1990's. Here is part of the testimony of then-seminarian Joseph Kellenyi:


"One hall in the seminary dorm," related Kellenyi," is nicknamed the 'Catwalk.' known as the residence of the more fashionable gays." "Catwalk," he explained, was a reference to the runways of fashion models, but also reflected the campy, feline-like personalities of those who lived in this area of the seminary. One member of the formation faculty in particular, he said, was known to take seminarians to high-profile gay events such as a popular gay production in Chicago's Lincoln Park.

According to Kellenyi and several other seminarians who attended Mundelein during the 1990's, one of the big events at the seminary was whenever a seminarian would "come out" as being a homosexually oriented person. The openly gay seminarians-to-be would do so by telling one or two of his closest friends, and, sure enough, the word of another "orientation proclamation," they said, would travel quickly throughout the halls of the seminary, especially to the formation faculty members. Oddly enough, attested Kellenyi, once a seminarian "came out," he would be wined and dined - literally - by certain faculty priests. "In my opinion," he said, "it's highly inappropriate to wine and dine any favorite students, orientation aside." But the special status given to openly gay seminarians, he said, is beyond the pale.


Kellenyi was a seminarian at Mundelein during the 1998-99 school year (five years after Bartosic, Casey and Hicks had graduated) during the tenure of rector Fr. John Canary. But Rose and others have indicated that the "gay subculture" was at least as prevalent, if not more so, in the early 1990's and before, under previous rector Gerald Kicanas.

Perhaps the most infamous gay child predator priest in the history of the Chicago archdiocese, Daniel McCormack, currently serving an indefinite term in a downstate facility for sex offenders, was also a member of the 1994 graduating class at Mundelein.

This disturbing coincidence of graduation dates was brought to my attention by the Rev. Paul Kalchik, pastor of Resurrection Parish on Chicago's Northwest Side, when I read his open letter to Pope Francis on the clerical sex abuse crisis, subsequently reprinted at the Church Militant website:


Another recent development that needs mention: The three priests slated to be elevated to the rank of bishop this coming month are all from the very same ordination class as former Fr. Daniel McCormack, Chicago's very worst, most notorious gay predator priest. I met Fr. McCormack once in 1995 right after he was ordained, and that very day I reported to seminary officials how off Fr. McCormack was!

At this point in time, it is all a matter of public record, Fr. McCormack was convicted and sent to jail. My question today is how could these three men live with a man like McCormack for four years, day in and day out, and not know or at least be suspicious of his character? Are they not already compromised if they knew or suspected what he was and did not say a thing? To say the least, I have serious reservations about these three classmates of McCormack all being raised to the episcopacy here in Chicago.

Kalchik of course does not directly accuse the bishop then-appointees of being homosexuals, let alone men implicated in child-sex abuse or its coverup. But his claim is that, at the least, a red flag should be raised.

Was it possible for an orthodox priest, not part of the homosexual network, to graduate from Mundelein in the 1990's. Apparently it was. According to Rose:


Nonetheless, said seminarians, there does exist an "underground network" of orthodox seminarians at Mundelein, but they keep their prayer life and spiritual direction with orthodox priests in strict confidence. According to Gregory Banks,* "students who are loyal to Church teaching and oppose the gay stranglehold on the seminary trade notes, conference tapes, and spiritual reading. It's not a great system, but without it, very few of us would survive. Second, there are some 'closet-orthodox' members of the faculty who try to offer the truth, although they must often do so surreptitiously (p. 61).

So is this the category in which we should put Bartosic, Casey and Hicks? As seminarians, did these three avoid the gay hookup scene, keep their heads down and exchange clandestine cassette tapes of orthodox homilies to buck themselves up?

It is notable that as far as I know, none of them has ever addressed the topic of "The Pink Palace." If their heads were down, they're still down.

Which of course is not exactly their posture when it comes to "social justice."

Here is Hicks hosting a "wine and cheese" reception at a North Side parish for a "conversation" on that very topic.

And here is Bartosic at a "Catholics praying for racial justice event" in Cicero. 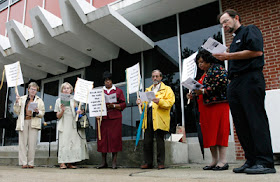 Casey has a perhaps more interesting resume. At one time he was actually the student in charge of the dormitory at Mundelein, according to classmate David Bottner, now vicar general of the Diocese of Knoxville:


Casey stood out early as a leader, serving as prefect of the dormitory, which meant organizing and coordinating activities with his classmates.

“He did a great job with that, and it’s not easy leading your peers.”

Was there a Catwalk in the dorm then?

Casey was also rector of Casa Jesus from 1998-2003, the notorious and now defunct program exposed as a "gay seminarian pipeline" from Latin America to Chicago.

Fr. Diego Berrio, the Chicago priest recently arrested for having public sex in Miami was a Casa Jesus graduate.


Church Militant spoke with a priest who was a former seminarian at Casa Jesus in the early 2000s alongside Berrio, who confirmed that Berrio's homosexuality was an open secret at the time.

"The rector knew. Everybody knew," said the priest, who asked to remain anonymous out of concerns for retribution.

At the time, then-Fr. Robert Casey was rector.

I should point out two more facts, though they are arguably not of major importance:

Four days ago, the archdiocese announced that Casey had been accused but then cleared in a 2008 investigation of sexual misconduct with a child.

If the charge was unfounded (which was the determination of the Illinois Department of Children and Family Services), then I am glad he was cleared.

I'm sure Fr. Phillips, the former pastor of St. John Cantius, is glad as well.

I also recently spoke with a member of a religious order of impeccable orthodox and "anti-homosexual network" credentials who had referred to Casey on social media as a "dear friend." I was interested in his perception of Casey's character from someone who I assumed knew him well. It turns out that the comment was based (it appears, solely based) on the fact that Casey had presided over the funeral of his father, a longtime parishioner at the church where Casey was then pastor:

He [then-Fr. Casey] was amazing. Very personable, very sensitive and spoke very highly of my father and it was greatly appreciated by my family.

Let's now speak plainly. Cardinal Cupich obviously didn't create the homosexual subculture in the Chicago priesthood, nor is he responsible for the clerical abuse crisis that largely followed from it. However, it appears to be the case that the still powerful network of gay priests and those who have collaborated with them form the heart of Cupich's shrinking base of support among Chicago priests and bishops. This is one of the reasons that Cupich has repeatedly rejected the claim that homosexuality has anything to do with the clerical abuse crisis.

It's not all about ideology.

And so, despite all the words about "accountability", "healing" and "change", things appear to be continuing as before.

The elevation of three "Pink Palace" graduates to the bishopric is clear evidence of that.

Is it possible that one or more of these men are good priests and good men? It is possible.

But I think it's much more likely, good or not, that they're in fact part of the problem.
Oakes Spalding at 10:49 AM
Share