The Perfect Symbol for the Current Pornocracy

The recent tree-planting ceremony in the Vatican, a preview kick-off for the Amazonian Synod, featured a sort of tribal picnic blanket on which were placed various native statues and objects. 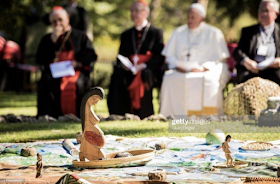 The above scene was described by Getty Images, thus:


ROME, ITALY - OCTOBER 04: Pope Francis and Cardinal Cardinal Cláudio Hummes, Archbishop Emeritus of São Paulo, President of the Pan-Amazonian Ecclesial Network (REPAM), stand in front of a statue representing Pachamama (Mother Earth) as they celebrate the Feast of St. Francis of Assisi at the Vatican Gardens on October 04, 2019 in Rome, Italy. During a highly symbolic tree-planting ceremony in the Vatican Gardens on Friday, Pope Francis places the upcoming Synod for the Amazon under the protection of Saint Francis of Assisi. (Photo by Giulio Origlia/Getty Images)

This obviously seems embarrassingly pagan, so apologists for the Vatican soon spread the word that the two most prominent statues ("Pachamama" and a similar one) actually represented the Visitation of Mary and Elizabeth.

How DARE anyone suggest this was a pagan ceremony?* 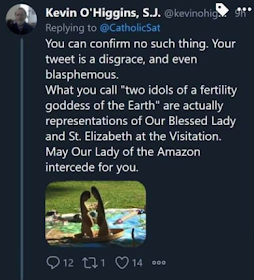 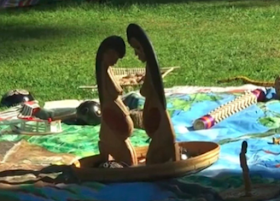 Apparently, the Catholic shamans moved the objects around like kids would on a play mat.

What were the other objects? To be honest, I don't really want to know, especially that long thing with the purple and orange striped ends. But it turns out that the apologists had cropped a larger image*. Here's a different version, panning right: 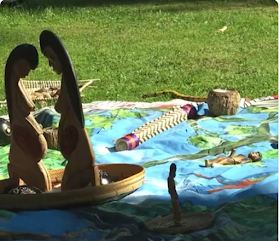 Let's pan in more on the right:

Yes, it appears to be a naked man with an erect Coco.

Fertility idol? Not at all, it's simply a statue of one of the prelate inhabitants of Sanctae Marthae taking in a bit of sun.

Okay, but here's some cold water for you: 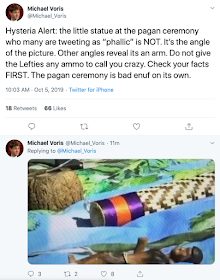 This is reassuring. And I'm happy I didn't have to become hysterical. The lefties won't get any ammo from me, today.

But I'm still not sure I understand what's going on. Is it his arm? Which arm? Does he have half an arm on one side and no arm on the other?

Is that half an arm or are you just glad to see me?

Yes, people are now debating this on Twitter, complete with different pictures at different angles with pointers and little circles and all the rest. What is it, really?

The original photo, however we characterize the native protrusion in question, is still the perfect symbol for the current pornocracy. The term was originally coined by a Protestant historian to describe the corrupt papacies of the 10th century. It originally meant rule by prostitutes.

But as we also all know, none of the sexually in question has anything to do with fertility.