Vatican Spokesman on the Drowning of the Pachamama Idols: "These people don't believe in dialogue." 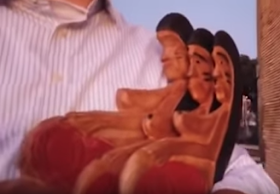 At this morning's Synod press conference in Rome, Paolo Ruffini, the Vatican's Prefect of the Dicastery for Communication, said that the men who removed the "Pachamama" idols from a sanctuary at Santa Maria in Traspontina and then threw them in the river Tiber "didn't believe in dialogue."

He also said the act was an "insult" to indigenous peoples.

If you are just now waking up, here's the background:

A few hours ago, just before dawn, Rome time, at least two men, entered the Santa Maria in Traspontina, removed the four or five "Pachamama" idols from one of the sanctuaries, walked to the river Tiber nearby, and after a few prayers, knocked them into the water.

One of them recorded the act for video. At least two videos have been so far uploaded to YouTube by a "Michael Del Bufalo", an account seemingly set up for this purpose.

Under the second video they posted an explanation for their actions:

This was done for only one reason:

Our Lord and saviour Jesus Christ, his blessed Mother, and everybody who follows Christ, are being attacked by members of our own Church. We do not accept this! We do not longer stay silent! We start to act NOW!

Because we love humanity, we can not accept that people of a certain region should not get baptised and therefore are being denied entrance into heaven.

There is no second way of salvation.

Yesterday, there was a minor storm on Twitter when it was discovered that all of Taylor Marshall's tweets had been deleted. "Where is Dr. Marshall?" people asked. Marshall and his friends weren't talking.

Someone quipped, "Pachamama got him."

The mainstream press is now reporting the story. From the Washington Post:

VATICAN CITY — Pope Francis’ controversial meeting on the Amazon has taken a criminal twist after thieves stole indigenous fertility statues from a Vatican-area church and tossed them into the Tiber River.

Video of the pre-dawn theft from the Santa Maria in Traspontina church was shared and celebrated on conservative social media Monday. The Vatican’s communications czar, Paolo Ruffini, termed it a “stunt” that violated the idea of dialogue.

It won't be long before they blame "Americans" and Donald Trump.

But even the Post is calling them "indigenous fertility statues."

The Synod did indeed take a criminal turn, but faithful Catholics know that this happened more than a week ago.

And the "dialogue" in the Church has been of the one-way Stalinist variety for seven years.

What next for the Synod? Only God knows.

But for now, in the words of Christina Niles,

Pachamama sleeps with the fishes,