Rayshard Brooks Was a Convicted Violent Felon on Probation


Rayshard Brooks was fatally shot by an Atlanta policeman in a Wendy's parking lot on Friday evening.

Because he was a black man shot by a white police officer in apparently dubious circumstances - initial reports claimed that he was "shot in the back" or even shot while asleep, for no reason - his death set off another round of violent riots in Atlanta resulting in, among other things, rioters burning that particular Wendy's to the ground.

(Of course, the Wendy's franchise was reportedly owned by a black man. That'll show whitey.)

What actually happened does not seem to be really in dispute, especially now that we have multiple sources of video evidence from someone recording the event on a cell phone, security footage from Wendy's and, perhaps most importantly, body cam footage from the police.

I'm not going to link to these videos. You can find them anywhere.

Brooks had fallen asleep in his car while in the drive through line, necessitating that cars had to drive around him. Wendy's called the police. They arrived and had trouble waking him up. When they did so it appears that he was intoxicated, giving odd and contradictory answers to questions, including whether or not he was drunk. He peacefully interacted with the police for over thirty minutes, took a physical sobriety test and a breathalyzer test and answered various questions. Both Brooks and the interviewing policeman seemed cordial and polite.

Finally, one of the policeman concluded that he was intoxicated and told him he was under arrest. But as Brooks was being handcuffed, he resisted, attacking both of the cops and initiating a brief brawl, which included a three-man fight on the ground. One of the police officers is heard to say, "stop fighting! You're going to get tased!" It appears they attempted to twice use a taser on him to no effect. After a number of seconds, Brooks breaks away from the scrum, having captured one of the tasers. The police start to pursue with guns raised. While fleeing, Brooks briefly turned and aimed the taser at one of the policeman. He was then shot two or three times, apparently in the back as he turned around again while running.

It is not my purpose here to argue about whether his shooting was justified, though according to most law enforcement experts I've listened to, it was. The argument is that even though the taser itself may not have technically been a deadly weapon, aiming it at a policeman during a fight set up a potentially deadly situation.

Who was Rayshard Brooks?

The media has portrayed him as a devoted family man who had been celebrating his daughter's birthday and had planned to take her out skating the next morning. Brooks is in fact married with at least three daughters and a stepson. 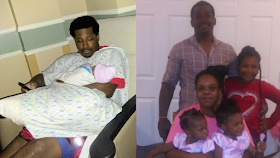 Devoted family men sometimes get drunk and even get stopped for DUIs. This part of the story is not particularly unusual or odd.

But why did he attack the cops after a long peaceful interaction? Why did the prospect of being arrested for drunk driving lead to him initiating a violent confrontation which would, a short time later, end in his death?

The answer to that question has been completely blacked out by the media. Even now, it is difficult or impossible to even find it on Google.

Rayshard Brooks appears to have been a convicted violent felon who was currently on probation. The "devoted family man" apparently had at least seven convictions including cruelty to children, family violence battery and false imprisonment - presumably against a family member.

I say, apparently, because it has not been confirmed that the Rayshard Brooks in the criminal listing below is the same Rayshard Brooks that died that night. But it almost certainly is, given his age, the timing of the convictions against other known facts and other evidence I'll cite below. And his mugshot looks like the same man, though younger (the convictions were in 2014).

The information can be found at this site. Here are the screenshots: 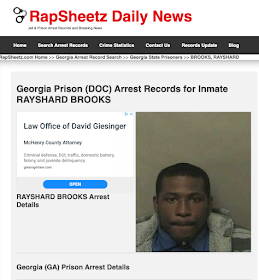 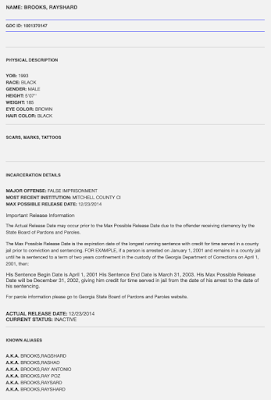 So it appears that Brooks committed these crimes in the spring of 2014 and was sentenced in late summer. He was given a concurrent sentence of 7 years, the length of the sentence for the most serious charge - false imprisonment. For unknown reasons he served less than 4 months and was then released on probation.

Other sources have claimed that he had other convictions from before this time as well as after. I haven't been able to confirm this.

One of the odd things about the case is that Brooks had a social media presence that, as of this writing, has still not been scrubbed.

He had a YouTube channel, which bizarrely included just one piece of original content - an interview that he did with some sort of legal reform show that he uploaded only a few weeks ago.

In the interview he discusses how his own probation had "inconvenienced" and "stereotyped" him.

Towards the end, Brooks good-naturedly declares: "The moment I do something out of hand, back to jail I go."


It now begins to make sense why he violently resisted arrest for a comparatively minor charge. One also assumes that the arresting policemen, having spent at least thirty minutes with him, had at some point learned that he was a violent felon on probation.

In the interview, Brooks comes off as a somewhat appealing character, at least if you don't start to wonder why he is in any moral position to claim that probation is unfair considering that he served almost no time for committing multiple violent offenses.

This interview has not been published anywhere in the mainstream media.

So he had a criminal past, had a bit of a chip on his shoulder about probation but was now a devoted family man.

I think it's more accurate to say that Rayshard Brooks was a thug. he did violent crime and was penalized for it (sort of) but remained a thug, probably until the end of his life.

That's what I think. I guess I won't be opening up any small businesses in Chicago in the near future.

The Facebook page of Rayshard Brooks is still up.

What do we find there in the time since he was released from prison and up to the present? 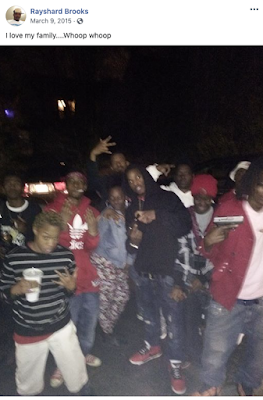 And perhaps most poignant of all, the devoted family man calling his daughter "Daddy's lil gangster." 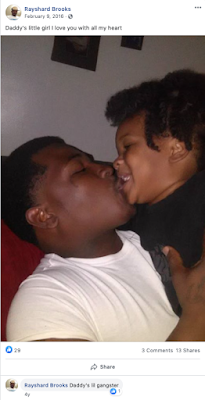 It's a free country, (or it was, or it sort of is) right? Why can't anyone, black or white, affect any attitude they want on Facebook? That's not a crime, is it?

Well, posing with a bunch of hoods, one of whom is holding a gun, may well be a probation violation, as is posing with wads of cash while traveling outside one's state. Maybe he got permission, who knows? Though one doubts that probation officers  - dealing simultaneously with many Rayshard Brookses - have the time or inclination to worry about such things.

But let's stipulate that publicly affecting the look of a thug isn't a crime.

But we know what his crimes were:

Again, the media still hasn't mentioned any of that, including that "cruelty to children" conviction. His surviving wife understandably didn't mention it. He was a devoted family man.

I have no reason to believe that Rayshard Brooks didn't love his daughter. I'm sorry that her father died.

But Rayshard Brooks couldn't escape affecting the thug's life, even when it came to his daughter. And I think that's what initially got him into trouble with the law and later ended up costing him his life.

Why is any of this relevant?

As I mentioned, earlier, I think it is relevant, or at least possibly relevant for the question of why Brooks and the policemen acted in the way that they did.

But, more importantly, I think it's relevant to the general issue, which is, after all, what everybody seems to think is the issue at hand - race, racism and race relations in America.

Here's why it's relevant:

There are thousands of Rayshard Brookses in every black neighborhood. This is a problem for some whites. It's a huge problem for most blacks.

More than 150 years after emancipation and the end of the Civil War, much of the contemporary black community is riddled with pathologies - violent criminal behavior, especially of young black males, being the most obvious but not the only one.

In Chicago, blacks are 30 times more likely per capita than whites to commit murder. And the statistics are similar for other violent crimes.

Black citizens being violent, not white cops being racist, is one of the most pressing problems for many Americans, though again, blacks suffer from it much more than whites.

Almost everyone knows this but almost no one will say it.

And don't be precious about why they won't. It's gone from getting snubbed at polite parties, to getting deleted from Twitter, to losing one's job to getting a firebomb thrown through one's window.

Maybe it's all due to systematic racism.

But I think you know what I think about that.

What are the answers?

Maybe if we burn down every inner city, give a few trillion to community organizations and say "black lives matter" a lot the other Rayshard Brookses of this world will pull up their pants and start listening to folk music.

And I think you also know what I think about that.

The Black Lives Matter people are right (though, obviously not in the way that they think). Rayshard Brooks wasn't just one instance of a man who made an ill-advised split-second decision that cost him his life, or, alternatively, a man who fell victim to the hasty actions of one racist cop.

The life and death of Rayshard Brooks is emblematic for our time.

What do you think?
Oakes Spalding at 8:06 AM
Share